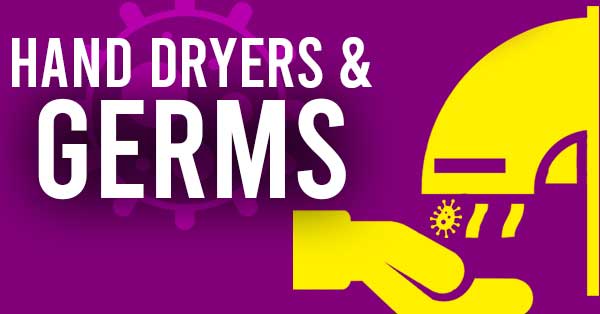 Have you ever noticed the bathrooms in our clinic use paper towel dispensers? No, it isn’t because we’ve thrown concern for the environment to the wind – rather it is an effort to keep patients safe.

You may have heard that hot air dryers are a common source of bacteria – but why? After all, air dryers are advertised as a “clean” alternative to paper towels. While this might be true in an environmental sense, when it comes to your health, paper towels are a clear winner.

Because they are often motion activated, it may be easy to think that because you do not touch the machine itself, you are staying germ-free. This isn’t where the issue lies though. The air being blown around is the real concern.

A 2018 Harvard article discusses how a study compared the levels of bacteria found in the air in a public bathroom to that of the air under a hand dryer. It was found that 2 minutes of exposure to the general air inside the bathroom yielded just one colony of bacteria (if any at all). When positioned for 30 seconds under the hand dryer however, it was found that on average 18 to 60 colonies of bacteria were found.

Where do the bacteria on the hand dryers come from?

The spout that blasts out the hot air is something you probably have not paid much attention to but may assume to be the source of the bacteria. However, studies have found the bacteria often originates from the air within the bathroom but becomes concentrated in the air being blown from the hand dryer. For example, this could be made of the germs that are launched in the air when a toilet is flushed without the lid down.

Are some models cleaner than others?

As reported in a 2016 article on Pubmed the worst offenders when it comes to bacteria are “jet” air dryers, the ones that blow extremely hard air. In comparison to the traditional air dryers that blow warm air slowly, a jet air dryer disperses 20 times more virus.

Should I avoid drying my hands?

It might sound like you should avoid air dryers at all costs, but not drying off your hands can be just as bad, if not worse, because it fosters bacterias ability to survive on the wet surface. Just keep in mind when using an air dryer that your hands may not be as clean as you think.