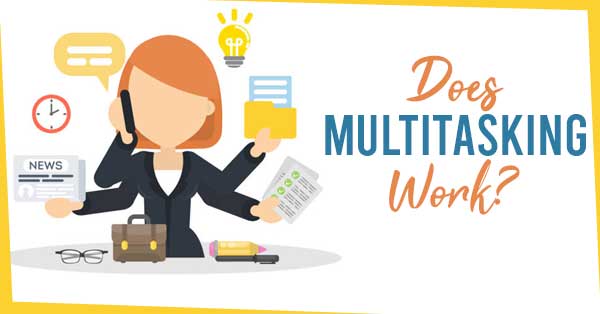 If you are a master multitasker you likely believe that your ability to juggle multiple tasks at once is saving you a lot of time. That could be, but if it is true – you’re in the minority.

The majority of us are actually less productive when working on multiple things at once.

How Important Is Your Second Task?

Often times the easiest way to improve productivity is simply to shut off the second task altogether.

If you have a tendency to watch TV or check your phone frequently while completing another task, this is the type of multitasking that serves to only slow you down from your primary task. Cutting this out is a simple way to improve your overall productivity.

What If Both Tasks are Important?

Even if your second task you are working on is something meaningful (not watching TV) you still take a serious decrease to your efficiency.

Harvard Business estimates that it takes up to 15 minutes to re-orient yourself after switching tasks. Something as simple as breaking concentration on a task at work to respond to an email can cause you to struggle re-focusing on the primary task.

Even switching tasks briefly can result in a serious loss of efficiency – as much as 40%. It is also believed you are less creative when juggling multiple tasks at once.

Focusing on one task, completing it, then starting the second task is often the most time-efficient process to achieve the best possible quality of work.

If Multitasking is Less Efficient, Why Do We Do It?

Despite the many billions of neurons our brains contain we are best suited for doing a single task at a time. However, we often have a perception that we can handle and successfully complete multiple tasks at once.

Most of us often multitask with common and repeatable tasks that we have completed before. This is more “do-able” than learning a new task while multitasking. Because our brain is already bouncing between so many tasks it’s hard to pile learning a new one into the mix as well.