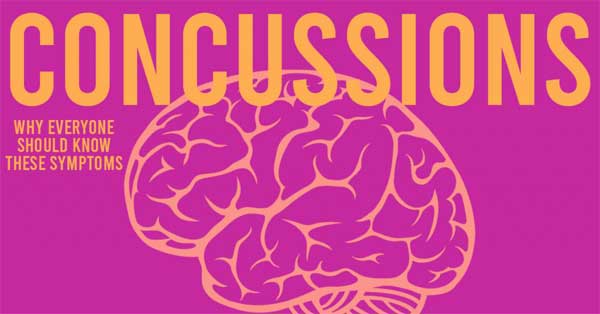 With professional football kicking off next week the sports media will likely return to discussing concussions – an injury commonly associated with football. Though the total number of concussions suffered by NFL players was down last year, the number is still high. Among the 20 pre-season and regular-season games played by each of the 32 teams, the NFL reports over 200 concussions every year. This is roughly two concussions for every three games.

But while football has become a platform for the public to raise awareness of the problems concussions pose, they are a threat to children and adults whether they participated in organized athletics or not. In fact, nearly 4 million concussions occur each year and though common they are dangerous. Because of this it is important everyone be aware of the symptoms associated with concussions.

It is a common myth that concussions are only caused by an impact on someone’s head. Rather impact anywhere on the body can cause sudden deceleration or acceleration resulting in a brain injury. Thus concussions can happen to anyone through a wide variety of impact.

Common signs of a concussion

Do not assume these symptoms will get better on their own. You will want to set up an appointment with a medical professional for a proper evaluation. We offer concussion training from experienced professionals and provide patients with education, consultation, baseline testing, and rehabilitation.

If you experience any of these symptoms, you will want to seek immediate medical attention.

You can learn more about the concussion recovery program at Williams Integracare here.