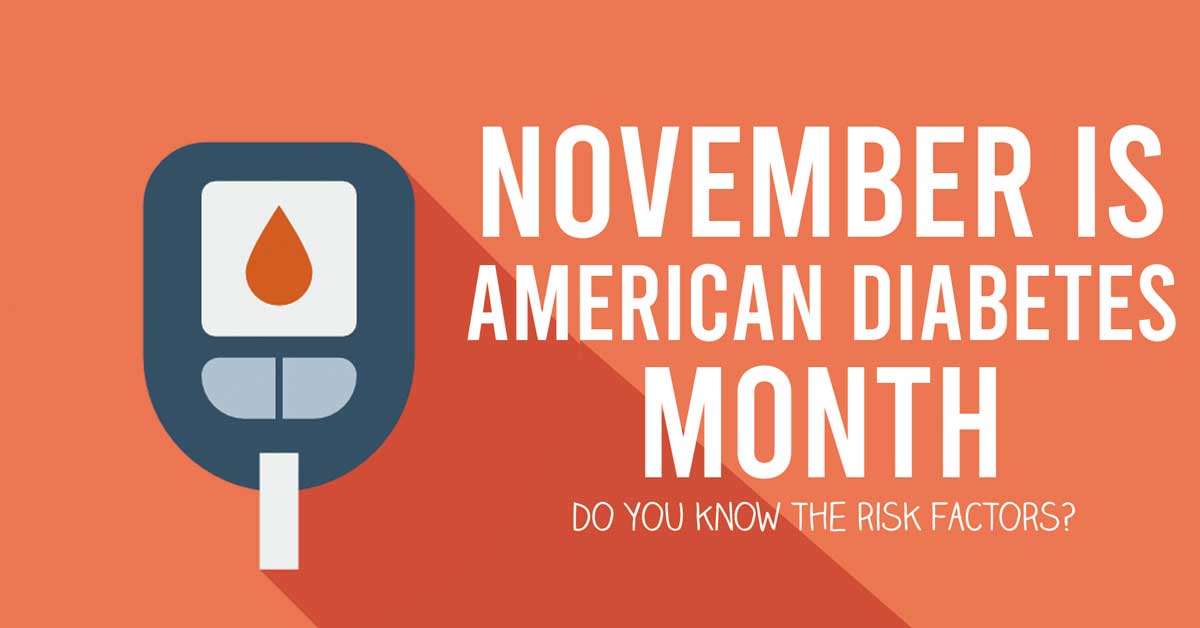 November is American Diabetes Month and an opportunity to highlight the condition that now impacts the lives of just over 1 in 10 Americans according to the CDC.

The prevalence of diabetes continues to rise in America and is it likely you or someone you know deals with diabetes each day. Because of this, the National Institute of Diabetes and other organizations use the month of November to raise awareness for the dangers of diabetes. It is also a great opportunity to think about what changes you should make in your own life to lower your risk.

The Importance of a Diagnosis

Regular visits to your primary provider can help you stay on top of your health including making it possible to catch an early diagnosis of diabetes. Among the 30 million Americans living with diabetes in 2015, the American Diabetes Association (ADA) believes that 7 million are not properly diagnosed. They may be living with diabetes, but without proper diagnosis and care they are not receiving proper management of their diabetes. In the last five years, the number of individuals living with diabetes has increased by over 4 million.

Obviously, it is a negative situation to see the number of diabetes cases continues to steadily grow over the last five years. However, we can hope that some of these new cases were the result of more widespread screenings and knowledge that resulted in an earlier diagnosis and thus an opportunity for patients who may have unknowingly been pre-diabetic to better handle their diabetes.

Where are the Numbers Heading?

Here’s the good news from the CDC: New diabetes cases have decreased over the last decade in every age group except one! The problem is the one age group that has increased is among people younger than 20 years of age. With the exception of our youth, the rate at which American’s are diagnosed with diabetes is actually decreasing.

Because of this increased risk in our youth, the American Family Physicians organization emphasizes the importance of testing children. Statistics from the SEARCH for Diabetes in Youth Study in 2015 found that over 18,000 children under the age of 20 have type 1 diabetes while nearly 6,000 children have type 2 diabetes in America.

Children are identified as being at risk if they belong to two or more of the following categories: “history of type 2 diabetes in a first- or second-degree relative, belonging to a high-risk ethnic group (defined on ADA website), acanthosis nigricans, hypertension, hyperlipidemia, or polycystic ovary syndrome.”

The information the CDC released in 2020 also detailed that 1 in 3 Americans are estimated be “prediabetic.” This is indicated by higher than normal blood sugar levels but not to a point where symptoms are present. Prediabetes can initiate damage to your heart, blood vessels, and kidneys that are common in diabetes patients. However, a prediabetes diagnosis does not guarantee you will eventually become diabetic. A timely change in lifestyle behaviors can help reverse this behavior.

What Changes Should You Make?

You can start to get a simple idea of your risk of diabetes by taking the ADA’s risk test.

The changes you can make to lower your diabetes risk are simple: lose weight, exercise more, and watch what you eat. These can be easy things to say, but difficult to commit to, but your health is important and you should make it a top priority.

The Mayo Clinic provides similar advice to those that may have already been diagnosed as prediabetic. Considering an estimated 1 in 3 Americans may be prediabetic, it is best everyone follows these simple guidelines.